In the making: PLANET 51

Planet 51 has been four years in the making but very little is known about this multi-million dollar production, however this is about to change as here we unveil everything about the CG production.

Ilion Animation Studios is the company behind this $50 million feature film that aims to do what no other company from has ever achieved; to enter the international market of 3D animated films. 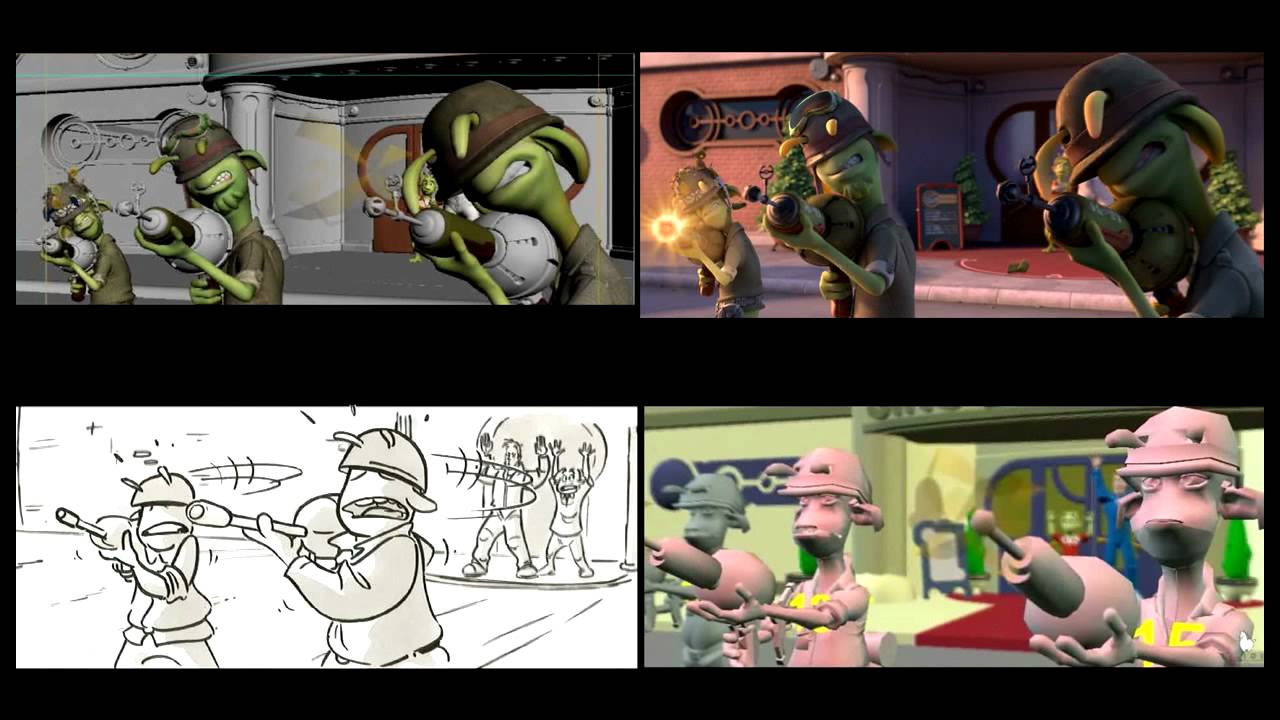 The movie is being produced by the CEO of Ilion Animation Studios, Ignacio Perez Dolset, and the CEO of Worldwide Biggies Inc., Albie Hecht. The director is Jorge Blanco and the script is written by Joe Stillman who has been Oscar nominated for Shrek and Shrek2.

The original idea for the theatrical release comes from Jorge Blanco, Marcos Martinez and Javier Abad (aka Bucho), the director and co-directors of the movie.

Planet One is the reverse story of an alien invasion; that is to say that the aliens are the ones that fear a “human” attack. This is a fresh angle of a classic theme. Aliens in Planet One are green, have eight fingers, two antennas and live in a world similar to America in the 50’s and are terrified that one-day they can be invaded from creatures of other planets. They have sci-fi films and comics that specialise on this genre and the authorities are even more obsessed than the civilians about it.

The movie will take us through the adventure where an astronaut lands on what he believes a deserted planet to interrupt an alien barbecue. It goes without saying that the aliens are not happy to see him, and the adventure starts for the NASA astronaut and the inhabitants of Planet One.

We talked to Marcos Martinez to find out how this adventure started and he told us that he met Jorge Blanco and Javier Abad at Pyro Studios, which is best known for the development of such games as Commandos.

Marcos Martinez, one of the co-directors of Planet One explains me that they left Pyro Studios and created Semillitas (www.semillitas.com) to start making its own projects, but this endeavour ended after only 6 months when their previous boss believed in them enough to offer them the opportunity to create a new 3D film. Ignacio Perez Dolset, from Pyro Studios, offered them the opportunity to make an animation studio that could break the Spanish barriers of animation and to be present in and EEUU.

The three partners spent eight months coming up with an idea worthy to become a  full-length 3D animated film. This time was spent on thinking tons of ideas to later pitch them to Ignacio… until one magic day the idea was great. To get the “big idea” was the main requisite to launch the studio. The next stage was writing a plot and to develop the look of the characters, concepts of the world, and animation tests. At some point we had a complete draft of the script and a clear idea of what to show the major companies of . Then, we began working on three teasers that showed our characters, story and idea. Obviously, all of this was achieved with the help of a great number of professionals behind us, explains Marcos.

Marcos told us that the main reason for embarking on this project was that Jorge, Bucho and himself wanted to experiment with some activity to do with storytelling and some more advanced animation. They think that 3D is a good medium because they are comfortable in it and from a commercial point of view it makes sense to launch a 3D movie, as it’s very appealing at the moment. But he says that, above all, we just wanted to!

Julian Romero, the Production Designer of the sets of the film, explained to us the process that he followed to create the look of an entire new planet. He says that there were two key factors to take into account; one is that it is a movie in an alien planet and the other is that the director knew that he wanted a look similar to in the 50’s.

My work method for developing a concept is to relate to the reality of what people already know or think they know. Taking these two notions as the starting point of the designs, I started researching about what people “know” about aliens. This was a long process but if I have to simplify it to the maximum; we “know” that they are green, fly in spherical objects and leave spherical signs in cornfields…
Based on these facts I created a planet with a new aesthetic where everything revolves around sphere-shaped forms.
In any event; I always bear in mind the narrative concepts of the movie and make the designs to support it in all of its aspects.

Empire magazine was especially interested to learn how the designs go from 2D to 3D. Juan Solis, Character Development Supervisor, told us that first the artists need to take a look at the general volumes and personality of the character, as the original design comes to the modelling artists in 2D. Then their job is to get the same feeling of the character’s individuality in 3D. On the technical side of things he says that they use 3D Studio Max, In-house software and Photoshop.

Animation is another critical part of the success of either a 2D or 3D film and it takes place later in the production stage. Enrique Oliva (aka kike), Animator, tell us that there has been a small team of animators experimenting with the set up and facial animation of the characters during the pre-production of Planet 51.

The film industry is an attractive business and since Walt Disney proved that money could be made from sweet little cartoons we have seen a steady growth in the competition of the animation industry.

Disney was the pioneer of animation and since it made its first feature-length film about a fairy tale called Snow White And The Seven Dwarfs in 1937 many things have changed, specially the technology. Disney’s first movie budget was, originally, $500,000 although it tripled in the end. The cartoon factory’s profits were around $8 million dollars at a time when each cinema ticket only cost 23 cents.

New technologies enabled Pixar to make the first computer generated animated feature film entitled Toy Story in 1995 with an estimated budget of $30 million. It made $192 million on domestic box office and $362 million worldwide. Disney was still involved on this business enterprise as the film’s distributor. Since then, Pixar, which has recently been bought by Disney, has led the market of 3D theatrical releases with blockbuster titles such as: Toy Story 2, Bugs Life, Monsters Inc., Finding Nemo and The Incredibles.

With this sort of profits is not surprising that other companies are being created to share this huge market. Huge successes titles Shrek, Shrek 2, Shark Tale, Ice Age, Robots and Antz come from DreamWorks and Blue Sky.

Ilion Animation Studios has been created to make high quality 3D films with a strong storyline to penetrate the American market. The studio is already starting to work on the development of an idea for a second film. Marcos Martinez says that this is top-secret information as new concepts for commercial films are very valuable nowadays.

What he could tell us though is that, at the moment, the storyboard sessions are his favourite part of co-directing this movie. He enjoys very much the process of the visual story telling of the script. Developing the personality of the characters and the creation of new gags is fantastic! Marcos explained.

He added: Right now, we have around 90 employees and a new script written by Joe Stillman. We are about to close a distribution deal for the film and we are working on the storyboard. It has taken four years to get up to this point and the movie is planned to be released in the second semester of 2009.