Recently released Avatar is a good example of how our entertaining environment has evolved in the past decade. Exciting and ambitious project, even with the guarantee of “Cameron’s name” it took the Fox a huge financial gambling to realize “the current most expensive film ever made” as reported the CNN,  which could turn “around the 300 million dollars” according to the box office-tracking Web site boxofficemojo.com.


12 years after the huge Titanic worldwide success, the public and the professionals of the 3D animation industry are expecting James Cameron to fulfill again the high expectations due to his name.
As stated by The Wired, if the movie is positively close to the public expectations, “Avatar will dissolve the boundary between audience and screen reality and illusion – and change the way we watch movies forever”

Cameron has challenged and revolutionized the technologies with a live action movie as “nearly 60% of the film is computer generated” according to the BBC. Avatar “was supposed to begin production in the summer of 1997 for a 1999 release.”, as published on Times in 1996,  but the movie was technologically too advanced at its time to be produced. According to James Dyer, editor in chief of Empire Digital speaking for the BBC:
"He wrote this to push digital boundaries so much so that when he went to people at Digital Domain and said I want to make this film they said it can't be done we can't convincingly bring this to the screen".
So after years of patience and determination Cameron told The Wired that he “managed to bring up the relevant technologies to make Avatar possible by making “ a lightweight, dual-lens, hi-def digital camera capable of shooting precisely calibrated 3D images that won’t give viewers a headache” which will allow the “”strobing” to be less noticeable” as reported by Variety. 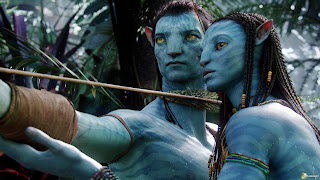 In the pursue of innovative technology, Cameron and his collaborators  created“"The Volume", a motion-capture stage six times larger than any previously used, and an improved method of capturing facial expressions, enabling full performance capture. To achieve the latter, actors wore individually made skull caps with a tiny camera attached, located in front of the actors' faces, which collects information about their facial expressions and eyes, which is then transmitted to the computers.” This new technology is a step forward to save time, as  The Business Week reported, “This technique eliminates hours in the makeup chair, and various other discomforts, for the actors”.
The final Cameron’s main innovation according to The Daily Mail is a “'virtual camera', a hand-held monitor that allowed him to move through a 3D terrain”.
Like he has describe in The New York Times “It’s like a big, powerful game engine”- “If I want to fly through space, or change my perspective, I can. I can turn the whole scene into a living miniature and go through it on a 50 to 1 scale. It’s pretty exciting”
Without any doubt Avatar has challenged all the different aspects of a moviemaking and with the new technologies, it brought the spectator to the 21rst cinema. The competition is fierce and every time, the filmmaker will have to adapt themselves quickly and efficiently to meet the public expectations. Weta Digital, based in New Zealand, has been in charge of the visual and character effects and for the construction of the digital environments of this film. Spanish David Caeiro, Mariano Blanc and Juan Antonio Ambles, amongst other cast, have been involved with the project.
Avatar comes to show how new technologies are at the service of story telling at its best. This movie could not be done ten years ago because of the need for the visual credibility of the characters and the surroundings. Many could say that the story is the main issue to take into account but film goers appreciate when technology goes that step forward to make them live an amazing experience.
James Giannopoulos, co-chairman and CEO of Fox Filmed Entertainment, predicts in an interview for CNN Entertainment that, over the years, audiences will simply come to expect 3D movies and that it will become the dominant form of film.